With some momentum after VIR, our focus shifted to the next event at my home track - Sonoma Raceway. This place has always been special to me. Not only do I have fond memories of attending my first ever NASCAR and Indycar races as a kid there, but I began road racing at the Sonoma kart track at age 12. I had the chance to tour Flying Lizard Motorsports’ shop around that time too, which planted the seeds for my endurance and sports car racing passion. At 14 years old, I drove the race track for the first time in a Spec Miata.

Fast forward to June 2019: I made my debut in the GT4 America series with Jarett Andretti in the McLaren 570S GT4, and we were able to have some pretty good success that weekend! A Pro-Am class win and third place overall finish were a great way to start my partial season with the program. Feel free to read about what that weekend was like here.

With a full year in the car under my belt, I was excited to return to a track that means so much to me - and one that we had done well with in the past!

The cars loaded in on Tuesday, as we had a full day of testing set for Wednesday. It was great to hit the track again and be reminded just how great Sonoma is to drive. The elevation changes and sweeping turns are like no other, and it can prove to be a challenge for any newcomers lacking experience there. We were up to speed very quickly, making lots of adjustments to get our baseline setup ready for official practice the next day. 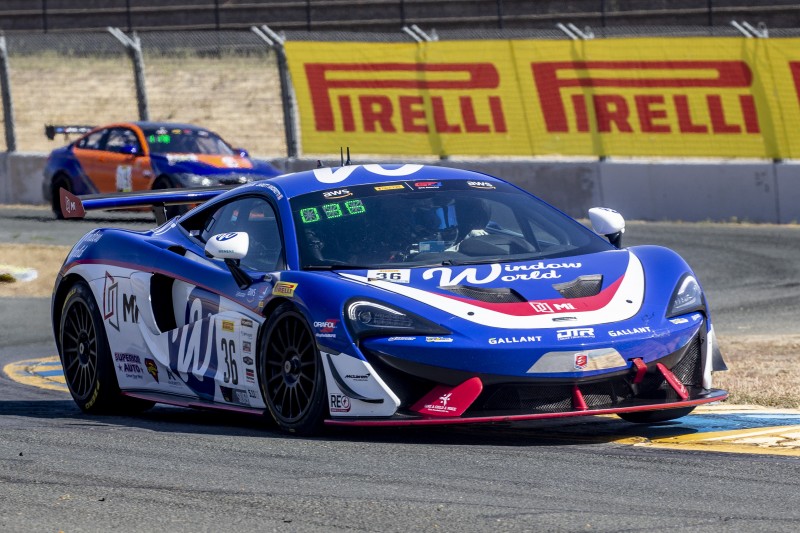 Official practice began well, I set the third fastest lap in the morning session, with just a few tenths separating me from P1. The car seemed to fall off quite a lot during the longer stint though, and similar to last year, we weren’t quite sure how we would compare to the competition when it came time to race. We tried a long run to wrap up the end of the day, finding some small adjustments that would help as the tires came near to the end of their life.

Jarett qualified in GT4 Sprint before we went out for SprintX on Friday, and was a bit further off than we were hoping for. We made some small changes to try to help the car, but we went in knowing it would be harder than we expected. I went first and managed to get us third on the grid for Race 1. Jarett caught some traffic in some important sections of the track, which cost him a quick time for his session. For Race 2, we would be starting in 17th. My qualifying lap would have put us just inside the top 10, so we quite didn’t have the outright pace we had hoped for from practice.

In Race 1, my goal was to slot into a position in the front pack, and just save tires until I could hand the car over to Jarett. At the start, I did just that. I stayed third place through turn one, just behind a Porsche Cayman and a KTM X-Bow. We thought we had a shot at challenging the Porsche later for an overall position, but knew that as long as the KTM was still on track, it would be the fastest car out there. I kept a consistent pace, driving carefully around the tires before bringing the car into Jarett halfway through. Jarett kept up the pace before the tires seemed to fall off a cliff at the end. The KTM broke down, propelling us into first in the silver class. Jarett managed to fend off a charging Ginetta to keep third place overall, and a silver class win! It wasn’t the most exciting race from our perspective, despite the stress at the end of watching Jarett, but we were delighted to come home with a good result. We managed to close the points gap to the silver class leaders by a sizable margin too.

Starting 17th in Race 2 would be a challenge. Jarett started and picked off a few positions into turn one. Most importantly, he got by our championship rivals. Jarett managed tires for the rest of the stint while keeping close to the pack in front. We pitted early, as usual, to try to get some clear track for my stint, but I came out right in the battle for second in the silver class with a BMW. Passing cars close in pace to us was tricky since our main weakness at Sonoma was on corner exit. It was hard for us to get close enough to the car in front come time for the next braking zone to make a move, so I knew that we would have to take advantage of others’ mistakes in some cases. When our competitors pitted for their driver changes, we were able to gain a couple of spots in a tight battle on their out-lap. I kept up the pressure on the BMW, eventually taking advantage of some slower traffic as a way to get by. I made a few more passes, and after it was all said and done, we came across the line in fifth overall, second in the silver class. This was probably the most fun I’ve had behind the wheel of the GT4 car! I had some great battles throughout the field, and we were very satisfied with the result.

Unfortunately, our luck had run out for Race 3. Jarett started a few places up the grid compared to Race 2, but we still had a way to go to the top. Jarett did the same at the start, moving up several positions and slotting into a comfortable gap. We didn’t quite have the pace that we did before, but we were still in a good position when it came time to pit. I ended up right behind our championship rivals and made my way by promptly. Although I pulled away from them, I was third in class, gradually struggling for pace more and more. The front tires had degraded much more than we expected, and halfway through my stint, I didn’t have a whole lot left. The result was an abysmal pace, and to top it off, with four laps to go we were plagued by electrical issues. I had to cycle the main power to the car every lap to the end, stopping to restart each time. That took us out of contention, but at the very least, we still salvaged some points by crossing the finish line.

Despite our misfortune in the final event of the weekend, I really enjoyed my time at my home track. It’s always special to be working with the Andretti Autosport team - we have such an amazing group of people that make this happen week in and week out! It’s always really rewarding to bring them the results that validate all of their hard work. Coming up next for us is Road America, another great track on the schedule. It just so happens to coincide with the start of college for me at Ohio State, both of which I’m looking forward to. Hoping we can bring home some more hardware soon!