This weekend marked our first round of the 2020 GT4 America SprintX championship, taking place at Circuit of the Americas (COTA) in Austin, Texas.

We left a few days early to tour one of my prospective colleges for mechanical engineering, Rice University in Houston. I was amazed by the campus; everything was picturesque. The emphasis on research there and strong education has given me a lot to consider when it comes to which University I’ll be attending this fall. After that, we were off to the races.

I was very excited to get on track at COTA on Thursday, having never driven there before. My first impressions were mixed. In a GT4 car, it feels like a combination of two or three different tracks and doesn’t flow very nicely. However, I did enjoy the run through the esses and up the hill towards the backside of the circuit. It feels more suited for a high-downforce car.

There were a lot of uncertainties going into the weekend, especially with the balance of performance. SRO had reworked the ballast weights, minimum ride heights, and engine mapping of nearly every car compared to how we ended the 2019 season in Las Vegas.

During testing, we were concerned with the pace of the McLarens as a whole. Our fastest laps were just outside the top ten. Jarett and I were usually pretty close in times, and we were running about the same as the factory driver. Practice on Friday was similar. We tried running through some qualifying simulations with my car in the morning but got caught up in traffic as there were over 40 cars on track at the same time. Our afternoon session was hampered by timing issues with our data system, causing us to miss out on some valuable track time. Regardless, we felt that we had made some good strides for qualifying and race one the next day.

Saturday morning was the coldest it had been all week. On top of that, before qualifying, it started to rain. Although it didn’t last long, it had been enough to create some treacherous conditions at first. I headed out on track on slick tires, struggling to get heat in them while I slid around COTA’s 20 turns. A red flag came out, so we all headed into pit lane. There was enough time for three laps once we went green. I hustled my way around and put the car third on the grid for race one. In the second group of qualifying drivers, including Jarett, the pace significantly improved. Jarett was the fastest McLaren yet was two seconds off the pole time from one of the Porsches, so we landed in 16th to start Race 2. The track just didn’t suit our car. 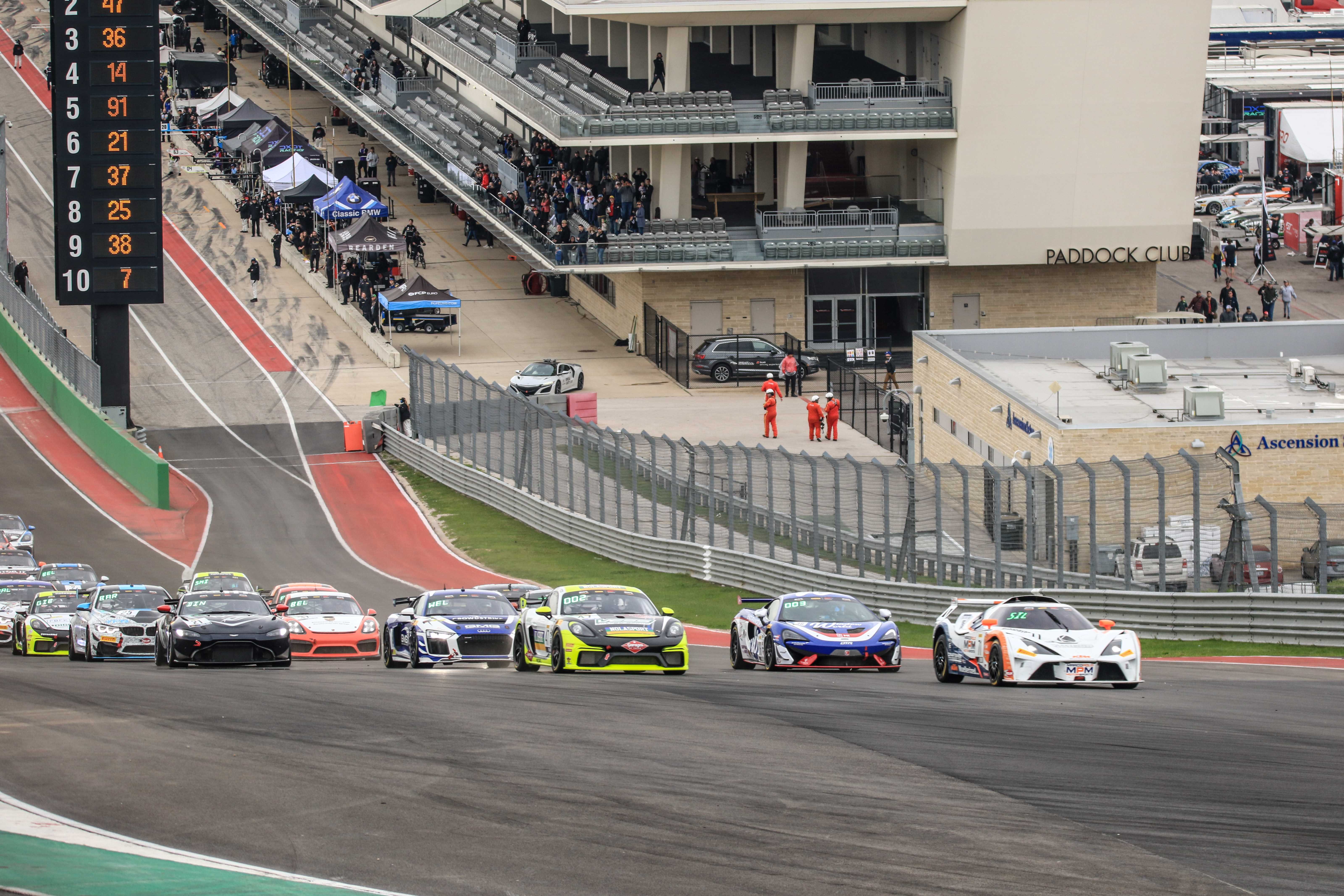 We knew heading into the race that we would have to make the most out of what we had. I started race one on a new set of tires to stay with the lead pack for as long as I could. It worked for a few laps before I started to lose front grip. I started to slip back, falling into fourth as one of the quick BMWs went by. I managed my pace and kept the tires underneath for the remainder of my stint. I handed the car over to Jarett with about 30 minutes left. Our driver change was near perfect, and we timed the pit exit to be within a few tenths of the minimum pit time, picking up a few positions along the way. Jarett lost a few positions to some of the Porsches charging their way through the field, but he got some positions back as well. We ended up fourth overall and won the Silver class! It was tough, as our race pace was still quite far off the leaders, but Jarett and I both did what we needed to, keeping the #36 in a position for a competitive result.

Race two would be more of a challenge as Jarett would be starting from 15th. He picked up some spots on the start but ended up in an extremely tight battle with some talented veteran drivers. It was great to watch even though he nearly gave us a heart attack a few times. He brought the car in a few positions outside of the top ten. We jumped multiple cars in the pits to put me in eighth place. I now had the task of chasing down some of the drivers in my stint. I fought with some other silver class cars to keep our position and eventually was able to break away. I kept my head down and turned some quick laps and managed to snatch fourth place overall on the last lap, this time finishing second in class. It was a very different race with a very similar result. 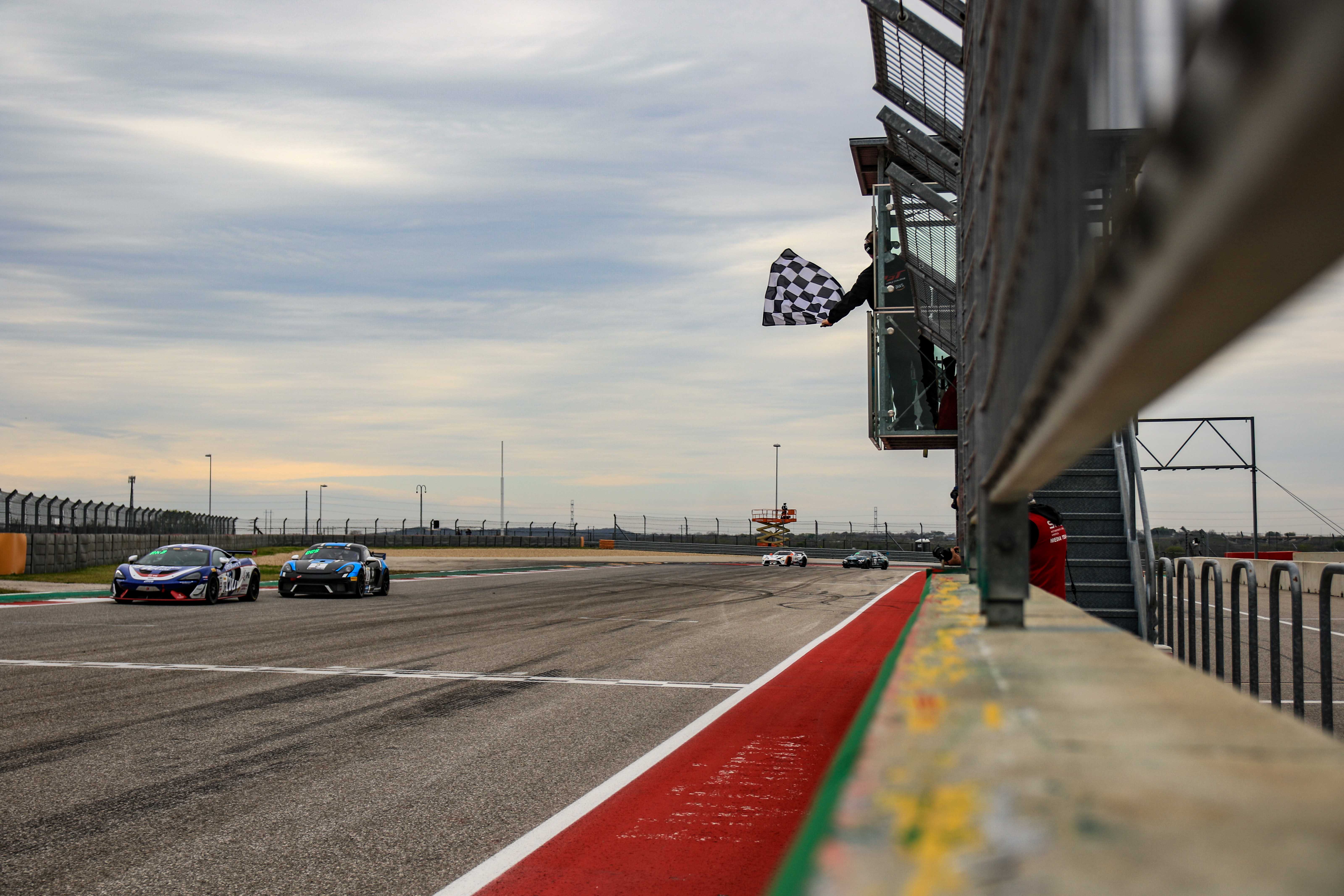 We’re leaving COTA satisfied with what we were able to achieve and hopeful that our pace will improve for the next rounds. I can’t thank the team and organization enough for all their support. We have some of the hardest working crew members in the paddock, always spending late nights to get our cars as best prepared as possible. Long Beach is up next, which I am very excited about. The track should suit our McLaren very well, and we are going to be putting in a huge effort for a good result there!