Entering the GT4 America championship marked my third consecutive year in the series – a partial season in 2019, a championship victory in 2020, and now helping the JMF Motorsport / Conquest Racing West organization begin their campaign in 2021. Despite having success in the series in the past, it had been two years without an overall win for me in the series – until this weekend.

The past few weeks have been hectic to say the least. Entering my second year of college while combining a busy fall race schedule has not been an easy task – but it’s something I’m committed to. I’m nearing the halfway point of the semester, with three race weekends under my belt during the school year so far, with another three to go.

Two weeks ago, we took to the track at Watkins Glen in the GT4 America series for our second race weekend with the Mercedes AMG GT4. The progress we had made after Road America was immense, and we were able to really take the fight to some of the best teams in the series there – highlighted with a second-place overall finish on Sunday.

With that momentum in mind, heading to Sebring, we had hopes to challenge for an overall victory again. 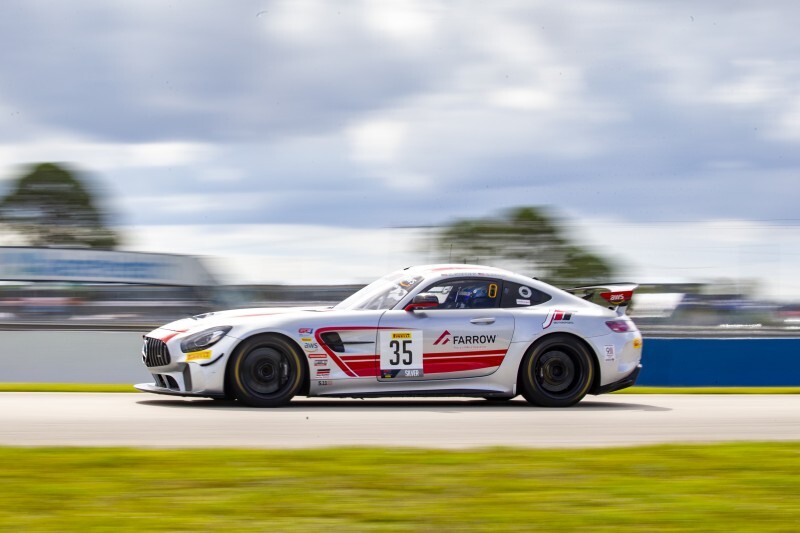 The weekend began quietly. A test day on Thursday meant both Michai and I had time to get up to speed with the car at the track, and we were able to make some great gains on setup heading into official practice on the weekend.

We went with the same strategy for practice as we had previously for Watkins Glen, I would take the entirety of the first session, and Michai would take the entire second session. Aside from trying out a few setup changes here and there, we put on sticker tires at the end, and were able to find enough time to jump to 2nd place on the time charts. Michai went out in practice 2 on the same set of tires, working on longer run pace – and was still able to put in some respective times on suboptimal tires.

Putting more laps out on track helped us find some extra pace through setup tricks that our engineer, Ian Willis came up with. Every change we made helped progress the car further into its optimal window. The best part about GT4 America is certainly the intense level of competition in the Pro field. It’s still somewhat surreal for me to be going wheel-to-wheel with drivers that I grew up watching in top level sports car competition. In the second qualifying session, I had hoped to put our #35 Mercedes a little further up the grid, but my lap of 2:11.892 was good enough for 9th position. Another 0.2 seconds would have put me 4th. All of the Mercedes on the grid were all within a tenth and a half as well, led by Guy Cosmo starting 7th, myself, then Chrisitan Szymczak, and Kyle Marcelli. Everyone seemed to be maximizing their equipment over the short run. This had us a little worried for the race, as the Mercedes appeared to be on the backfoot on raw pace. 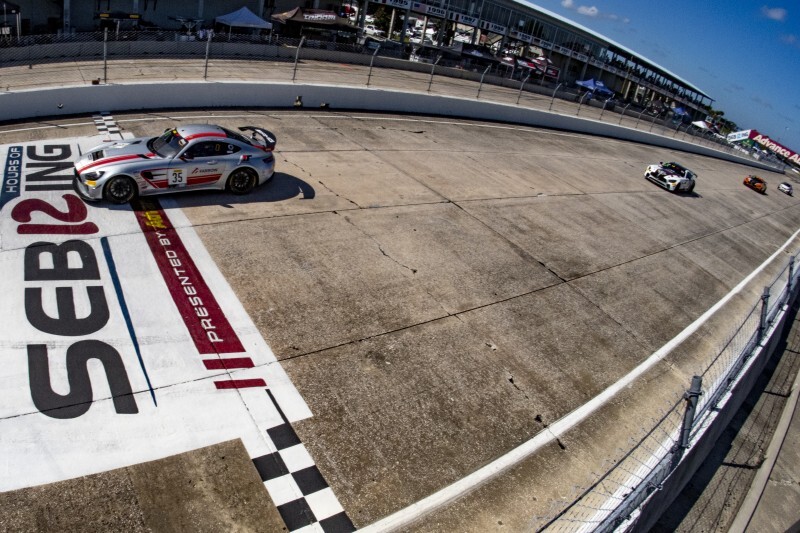 Regardless, Michai had put us 3rd on the grid for Race 1 with a time of 2:12.364 in the first qualifying session. With the Florida sun high in the sky, it was time to take to the track for our first race of the weekend. Michai got a good start and maintained his starting position after the first few corners. The lead BMW had pulled away early on, while Michai battled with the Porsche for 2nd position. Eventually, he capitalized on a mistake that allowed him to get by. We pitted shortly after the window opened, and I took over the wheel. At this point, tire management was going to be key to getting to the end. The track had warmed up in the 90 F heat, which made wheeling the Mercedes a major handful. Luckily, the tire degradation was much worse for our competition, which allowed me to run down the leader by a few seconds every lap. Eventually, I caught the leading BMW and made a pass for the lead. From there on out, my job was easy. I just had to hang onto the tires and bring the car home. In the end, I had built up a 6.7 second gap to the Porsche behind, crossing the line to secure the overall win. 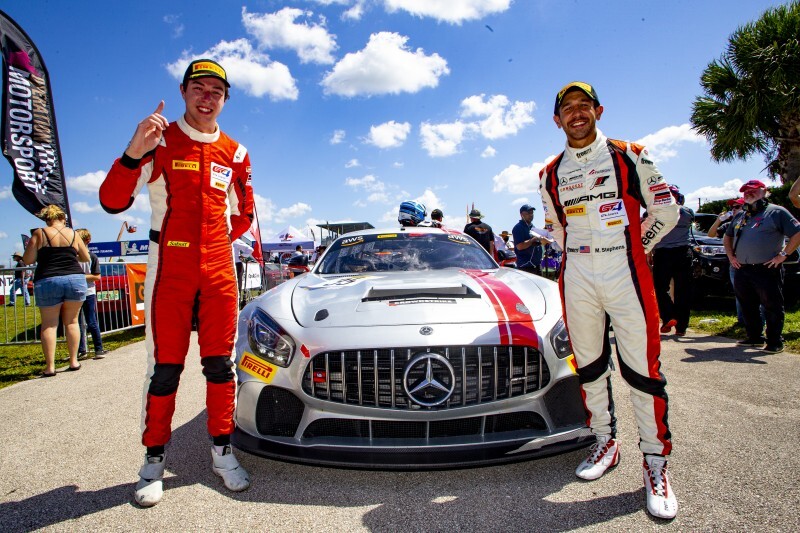 It was amazing to bring home the win for the team after just two previous race weekends in the series. Eric Bachelart had done such an amazing job to put together this team of individuals - who were the real ones that made it all happen. Having people like Ian and Mitch Davis in leadership positions on the program was instrumental in guiding the team to success.
We weren’t done quite yet though, Race 2 was still up for grabs on Sunday. I started the race from 9th position, but unfortunately, a few mistakes from my part at the start put us slightly on the back foot. I got a bad jump off the line, and lost a few positions in the first series of corners. I refocused and started to work my way back up through the field. As soon as I cleared the first car ahead, I put the hammer down and grabbed the fastest lap of the race in the process. Although our Mercedes is really good on tires, we struggle to battle people early on due to the lack of power in a straight line, which can make it really hard to build up runs on the competition. Once we had clear-track, we could turn some good laps in – just getting that clear track proved to be a challenge.

I worked my way back up to 9th, putting us inside the top 10 for when the pits opened. Michai hopped in early and started to work on moving us through the field once the Am-rated drivers took over up front. He drove an excellent stint and moved the Mercedes all the way to the front of the pack – taking over the lead with just two laps to go. He held on and wrapped up a second overall win for us in the weekend. 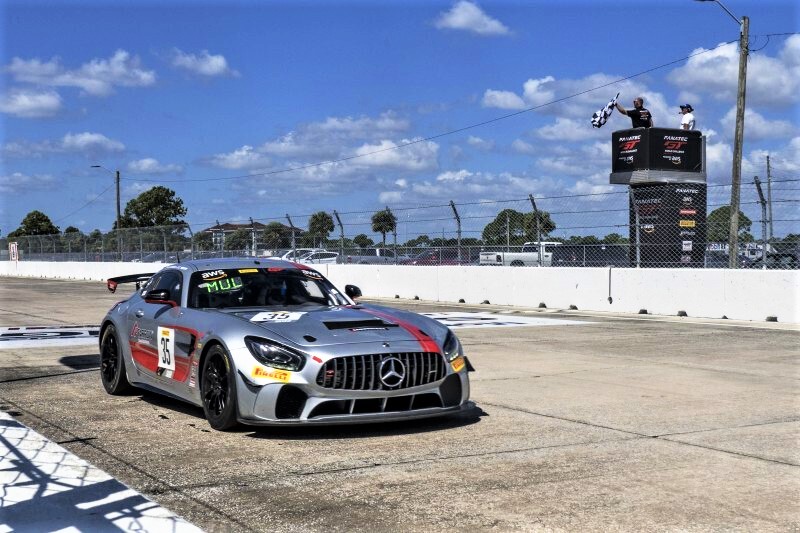 Overall, sweeping the race weekend proved to be a very special moment for everyone involved. I’m so grateful for the opportunities to go racing again this year. 2021 has been special for so many reasons, and I owe a huge thank you to John Farrow for making this year happen. Seeing John so ecstatic for our first race wins as a team this weekend was what put a smile on my face the most. Hopefully we can have some more of these results in the near future!

It’s going to be a busy series of weeks for me ahead – I’ll be back in the LMP3 car for the IMSA Prototype Challenge race this weekend at VIR, then back in the GT4 the following week at the one and only Indianapolis Motor Speedway! 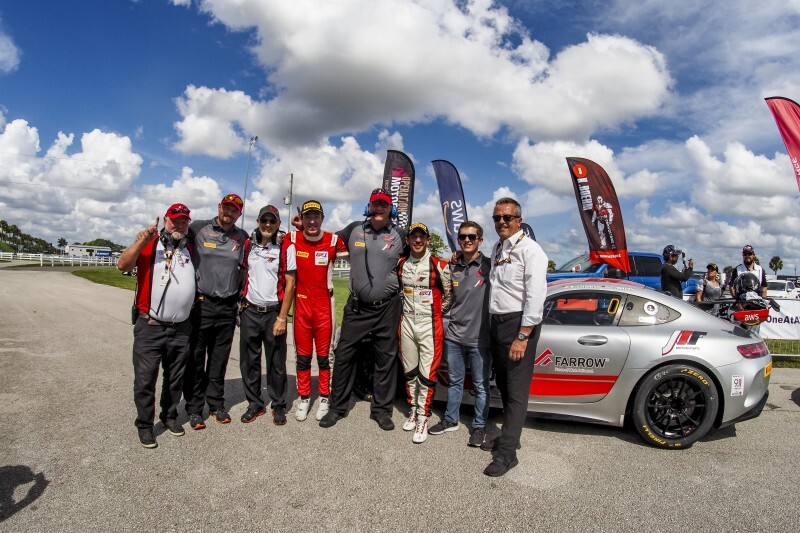