These past few months have been some of the strangest of my life. It’s hard to believe that we’re approaching the four-month mark from when the world first shut down. I’ve been used to long breaks out of the race car before, this past year lasting from October to March, but I always had something else to be working on. After graduating from high school in May, there hasn’t been a lot to keep me occupied, aside from sim racing, and anxiously waiting to see what my living situation will be at Ohio State later this year and whether some of our classes will be held in person or not.

Cabin fever really started to hit me a couple of weeks before we left, so I was really looking forward to just a change in scenery - along with getting back behind the wheel of a race car!

We were in for a long week, flying out to Virginia on Tuesday, and flying back home Sunday night. I wasn’t sure what traveling would be like with all the new restrictions in place, but getting out to VIR turned out to be the least of our worries. This was probably the quietest I’ve ever seen SFO, and thanks to Delta maintaining good distancing policies, the whole travel process was calm and hassle-free.

After a restless night at our Airbnb, (the description failed to mention the railroad tracks 100ft from the front yard) we were at the track on Wednesday for a day of testing. Nothing can compare to being back behind the wheel of a race car after such a long time off, especially around a place like VIR. The flowing, high-commitment nature of the green hills truly make it live up to its testimonials throughout the years. As Paul Newman once said, “If there is a heaven on earth, it is VIR.” 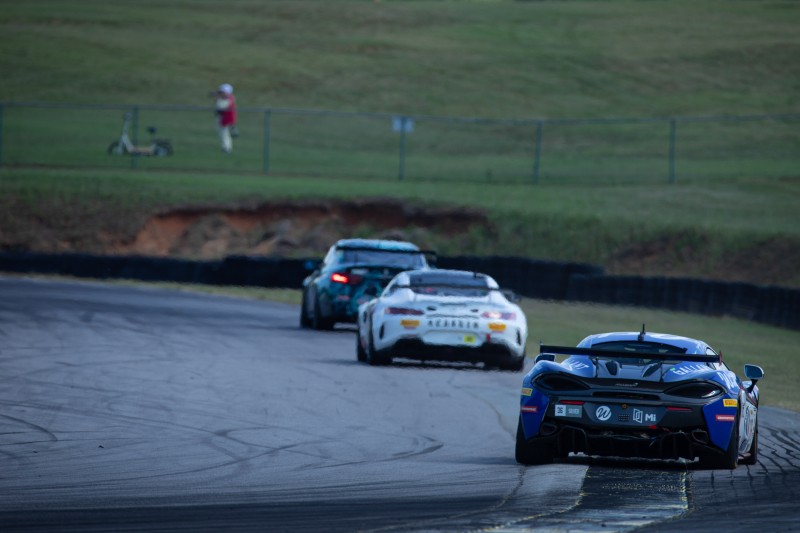 Thursday marked the beginning of official practice. We didn’t think the #36 car had a ton of pace, but our long-run speed seemed to be fairly consistent. We made some minor setup adjustments to get the balance where it needed to be before feeling ready to contend in qualifying the next day.

To add a bit of confusion to the paddock, we would be racing Jarett’s sprint class car, the #18 McLaren, for the third race of the weekend. The original plan was to race the Endurance-sponsored car at Long Beach, but since the race was canceled the team still needed to fulfill the TV time Endurance was entitled to. Race 3 this weekend was the makeup for Long Beach’s canceled round, so we worked with SRO to get the #18 car on the grid in place of the usual #36.

Here’s where things got a little complicated, qualifying for race 3 would be determined by the starting driver’s second-fastest lap in the first qualifying session. In order to qualify the #18 car for race 3, I would put in a lap in the #36 car in qualifying 1, then in qualifying 2 with the finishing drivers, (including Jarett in the #36) I would drive the #18 car, where my second fastest lap would put me on the grid for race 3. Confused? Yes! Most of our competitors were too. The important thing for us to note was that I would have to qualify with the tires I would be starting race 3 on, so we would have scrubbed tires while the rest of the field was starting on a brand new set.

Qualifying went pretty well, Jarett and I set lap times within a tenth of a second of each other in the #36 car putting me 4th for race 1 and Jarett 11th for race 2. My qualifying in the #18 car put me 3rd for race 3 and I ended up setting the fastest lap for a McLaren during the whole weekend.

Race 1 started out great. I got the car up to third and stayed there for the remainder of my stint. We didn’t have the pace to catch the leaders, but I was able to put a large gap to everyone behind as well. Our pit stop was near perfect, putting Jarett out in 2nd. Unfortunately, our race would end early after a failure on the left front put Jarett off track. That’s racing, some things are just out of our control. The end of the race for our competitors turned out to be interesting, as half the field ran out of fuel on the final lap. We start the race with a full tank of gas, so for race 2 we now knew it would be a stretch to get the car to the end.

After a semi-late night for the crew, the #36 was ready to contend for another podium in race 2. Jarett got off to a great start, picking off a few positions in the opening laps. Things started to go wrong in the pits though. When Jarett entered the pit lane, the limiter took him over 50kmh right next to the radar trap. Although Jarett didn’t do anything wrong, this gave us a drive-through penalty. It’s a shame since we had a great stop otherwise, and even after I made a slight mistake on track battling for position, we were still tracking for another podium result. The drive through forced us down the order, but we still learned more about the fuel-saving we would need to do in order to get us to the end.

Race 3 was our final chance to claim a good result for the weekend, so we knew we would have to make every second count. I got out in third at the start but with our scuffed tires, we were feeling the pressure from behind. I was fuel saving while putting in some good lap times since we couldn’t bank on a caution to come out. Luckily, we got a caution anyway, which allowed us to push until the end. I tried making a move around 2nd place on the restart but didn’t have enough temperature in the tires, so it cost me a position as I slipped back to 4th. I stayed there for the rest of my stint, and in the pits, we were able to jump to 2nd again. Jarett tried to hang on to 2nd but got edged out by Bill Auberlan flying through the field right at the end. We didn’t have the outright pace to compete with the BMWs, but we put the McLaren to its limits and ended with an overall podium, plus a victory in the Silver class!

In the end, I’m just glad to be back behind the wheel and out of the house. There’s a lot to look forward to with the rest of the year and our GT4 America schedule. Our next race is in three weeks at Sonoma Raceway, with Road America and Watkins Glen following later in August and September respectively. I’m very excited to cap off the season at Indianapolis Motor Speedway as a part of the Indycar Harvest GP and the Intercontinental GT Challenge weekend in October as well! With all this going on, I’ll be moving to Ohio to start the next chapter of my life in college soon too. 2020 hasn’t been the year we expected, but I’m doing my best to make the most of it - looking forward to what’s to come. 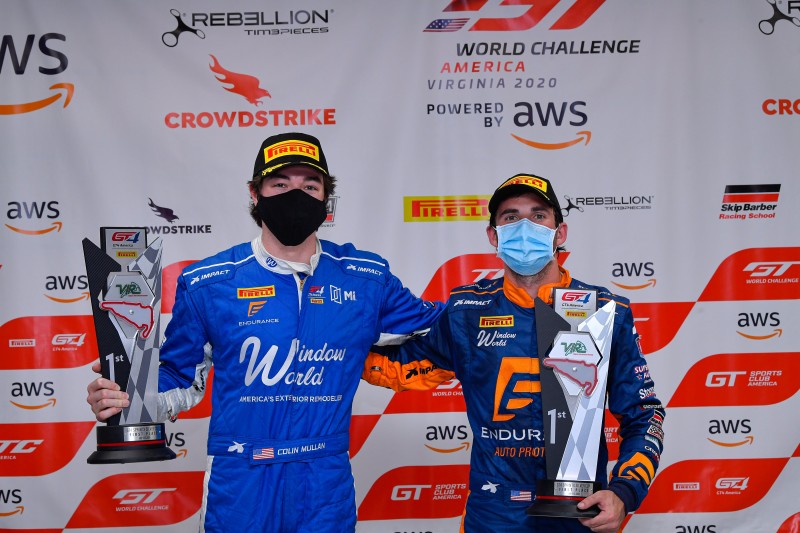