Our past race weekend at Lime Rock Park was an interesting one for sure. Following up our best result of the season, 2nd place at Canadian Tire Motorsports Park, we were eager to keep the momentum moving forward.

The GS and TCR classes have been fairly close in times all year compared to last. The TCRs typically handle better in the high-speed corners but lose a lot of time on the straightaways. Lime Rock is the shortest track on the IMSA calendar, clocking in at just under 1.5 miles long. We expected to be very close to GS pace in the Hondas, so we knew that working through traffic effectively would play a major part in the race. It was also shaping up to be a blistering hot weekend, with temperatures above 90⁰F.

Friday was a busy day for us; we had all three practice sessions and qualifying. I was the only driver on the L.A. Honda World team to get seat time in after the #37 car had electrical gremlins early on, and I had an axle issue that put us behind the wall halfway through. Practice two had its own set of issues, even though the cars ran fine. A long red flag took up the majority of our track time, so I gave Max the majority of the session to get him up to speed around the circuit. We showed good pace at the end of the session on old tires, but we didn’t know how this would relate to the race later on. 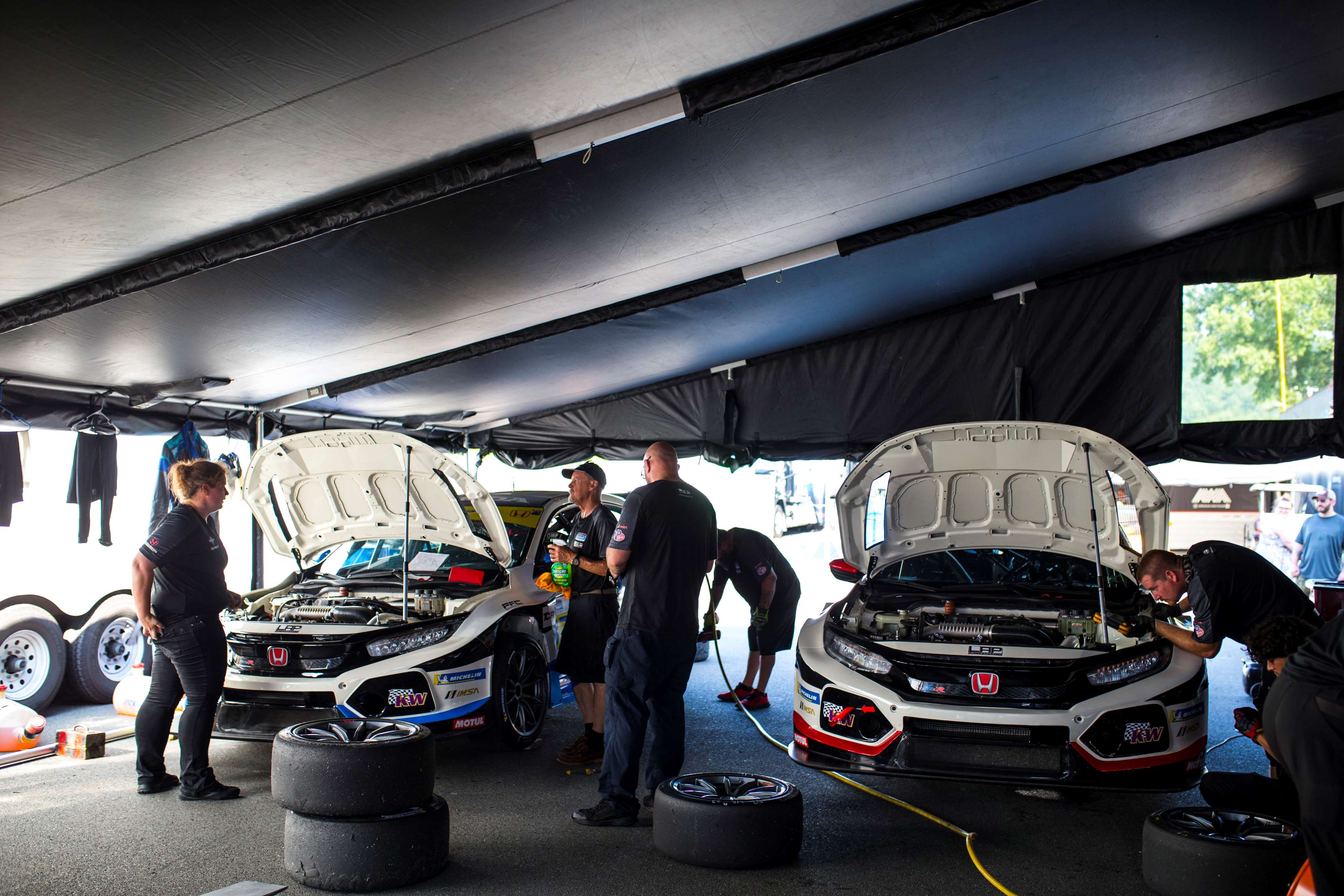 Max went out for the final 15-minute practice session to get warmed up before qualifying and put the car eighth on the grid. Another tenth of a second would’ve put him 5th, so times were incredibly tight. What was most staggering though, was just how close the TCRs were to the GS field. The TCR pole-sitter put down a fast enough time to start second on the overall grid, faster than 20 of the GS cars. We still knew that the GS cars would have better race pace, as they don’t have nearly the tire wear that we do in TCR, but it would make for a very interesting dynamic out on track.

It was chaotic for the starting-stint TCR drivers out on track dealing with the GS traffic for the first few laps. Max eventually cleared some slower cars holding him up, and began to catch the next group of TCR cars. Around the 35-minute mark, Max radioed in about the heat. He said he thought he was suffering from heatstroke and needed to get out of the car as soon as possible. The minimum drive time is 40 minutes, so we pitted then. I had a cool-suit ready, which would pump ice water through rubber tubing in my shirt to keep me cool on track while Max didn’t, so I wasn’t concerned with going the long distance. After we pitted, we were two laps down and in 12th position. 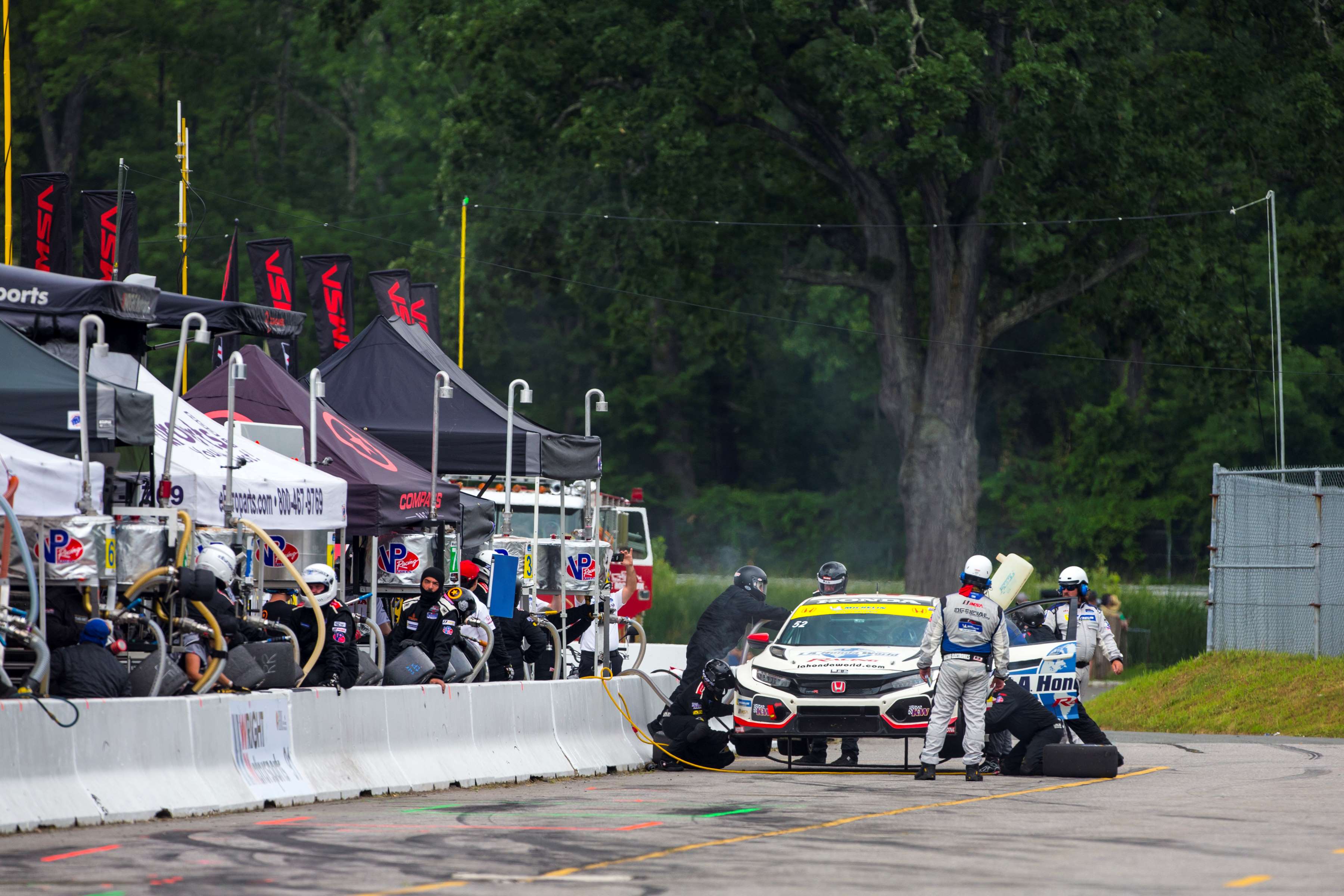 The tires seemed to degrade on pace a lot earlier than we had anticipated, even though the physical wear was nothing like at Watkins Glen. We didn’t have any concern regarding a tire failure. I nursed the car on my out laps since any minor damage early on can have a greater impact later in the stint. The TCR leader was close behind, putting me in danger of going a third lap down. I maintained the gap, gradually picking up the pace once the tires got up to temperature. I had to be prepared to do a longer run on the tires, and we already saw cars dramatically off pace at the end of their stint.

I had a good battle with factory Honda driver Ryan Eversley for the majority of my time out on track. He was two laps down just like I was, so we ended up fighting for position. I managed to hold him off until a caution came out with 35 minutes remaining. We both got one lap back to the leaders, but Ryan managed to pass me during the pass-around procedure under caution due to a radio miscommunication on our part. I came into the pits for a final splash of fuel and new front tires, and we were back out. I had fought back up to 8th since I had hopped in the car, and there was an opportunity to make up a few more positions.

I was quick on the new tires, able to capitalize on those who opted to stay out for better track position. Aside from some traffic hindering me at the start, I managed to move into 7th fairly early on. As the race went on, I grabbed 6th with about 10-minutes left, which is where I ended up finishing.

Overall it’s not the result we were hoping for, but we recovered well and had a decent points day. The entire L.A. Honda World crew was on point even in the heat. Our pit stops and strategy were strong and helped us move forward the entire race. Currently, Max and I are 7th in the championship, only nine points back from 3rd. There are still four races left on the schedule, so we have plenty of time left to make up some more ground. Looking forward to our next race at Road America in a few weeks!