Piecing it all Together - GT4 America: Indianapolis Motor Speedway

We were going into the final race of the year with heavy hearts. I lost my uncle to a lengthy battle with Parkinson’s and Lewy Body Disease the day that we were leaving for Indianapolis. He had always enjoyed my racing, even making it out from the West Coast to Lime Rock Park in Connecticut to see me race with the MINI JCW Team. He was a huge inspiration for me, along with my grandfather, to start fundraising for Parkinson’s in the first place - using racing as a great platform to begin. I’m glad he was able to see me race in a national series before his health took a turn for the worse.

This weekend was also a huge race for the Andretti team with Jarett’s dad, John Andretti, passing away to colon cancer earlier this year. Part of John’s ceremony was taking his “last lap” around IMS in his hearse. As a tribute to John, we ran a special livery on the #36 car commemorating the paint scheme that John used in his last Indy 500 in 2011. Pictures don’t do this car justice, the colors came out stunning. We were also racing on a dual weekend with Indycar, so our pit box had frequent visits from Michael and Mario Andretti during the races. 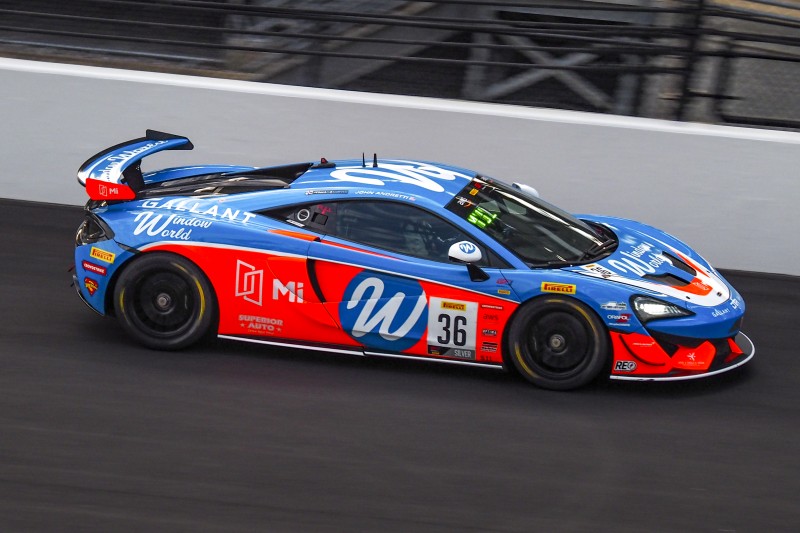 To top it all off, we were coming into the weekend with a two-point lead over our championship rivals in the #28 BMW. Championship implications were on the line, and it would all come down to the final two races.

We arrived at the track on Tuesday afternoon to walk the track and see the newly wrapped cars for the first time that week. Brian Till, our race director, couldn’t have described the place any better, “I only get goosebumps standing in the pit lane at two tracks - Le Mans, and here.” IMS has such a rich history in motorsport as a whole, it was a dream come true to take to the track there for the first time this weekend. The track configuration itself wasn’t anything too remarkable for us, and we did have a few areas that we thought would be a potential concern to our performance in the McLaren. However, we remained optimistic about the next day. 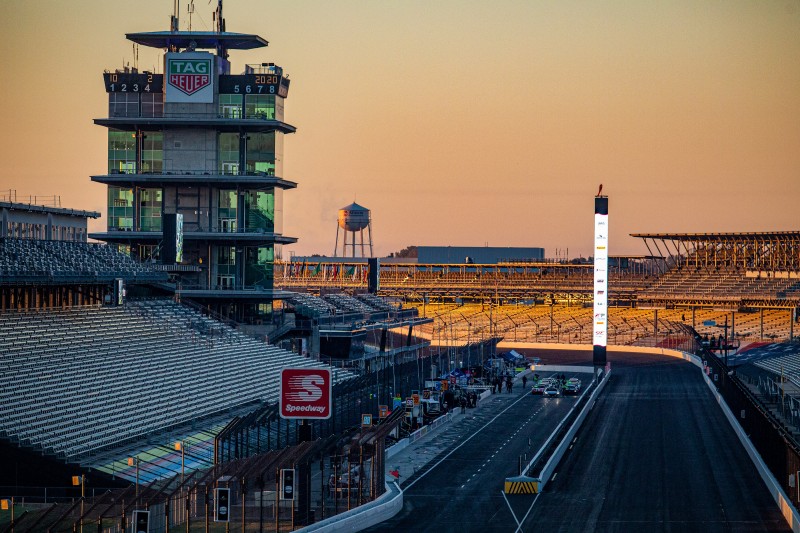 We still had a lot of time to wait on Wednesday before our first time out on track in the afternoon, so I was able to take an engineering calculus midterm in the meantime to the amusement of my crew. Eventually, we had our first session out on track at 3:00 in the afternoon. We split the testing strategies between both cars - Jarett put sticker tires on halfway through the session, where I ran an older set from COTA the whole time, making some adjustments periodically as we saw fit. Our long-run pace seemed to be closer to the overall leaders than we had been before. I still thought we needed a bit more to compete with the Astons, which had been the fastest given the current BOP for a few races now, but we weren’t as far off as we had been in the past.

The second practice was only an hour and a half after our first session out on the track, so we had a pretty quick turnaround time. I went out on a new set of tires this time and was able to get a pretty good lap in on a full fuel load. The longer pace throughout the rest of the session was strong as well. I ended the session 2nd overall, so we were filled with confidence going into the next day. 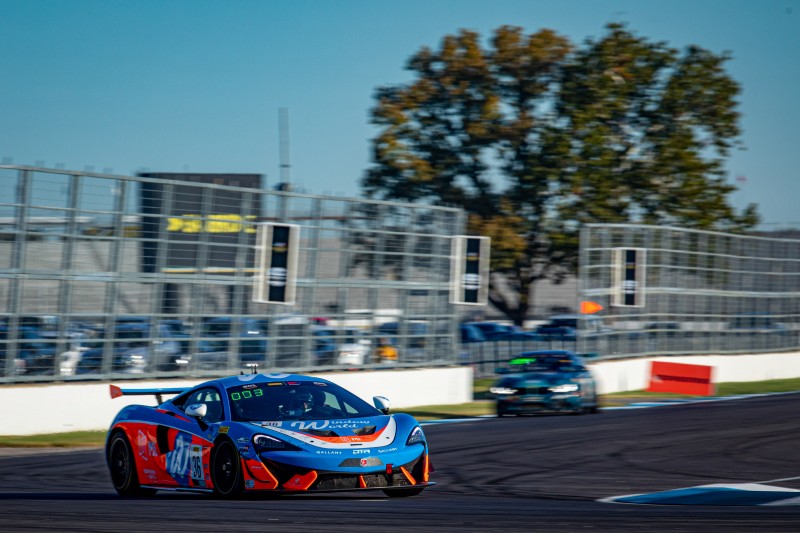 Thursday was a bit packed, with our qualifying session placed fairly close to Jarett’s first GT4 Sprint race. We decided to go with the same driver order as we had last at COTA - where I would be finishing Race 1, and Jarett would be starting. Thus, I qualified against the majority of pro-class drivers. Jarett went out in Qualifying 1 and ended up 4th with a time of 1:31.4. He was only a tenth or two off of the #28 BMW, so we were feeling like we really had a good shot at the championship (unlike COTA, where the BMWs were over a second faster than us). I got out for Qualifying 2, and after practice the day before, I was feeling good at my chances to qualify at the front. I pushed hard on my opening lap to try to get the tires up to temperature for my first timed lap, but it was still too cold outside for them to be quite ready. I backed off on my first timed lap to find some better spacing between other cars, then pushed for another one right after. It felt like I had maximized everything out of the car - putting our best lap of the weekend in at a 1:30.8; over a second faster than the other pro-class McLaren, with a factory driver behind the wheel nonetheless. Despite this, it was only good enough for 8th place on the grid. Ironically that was still our best Qualifying 2 result all year! 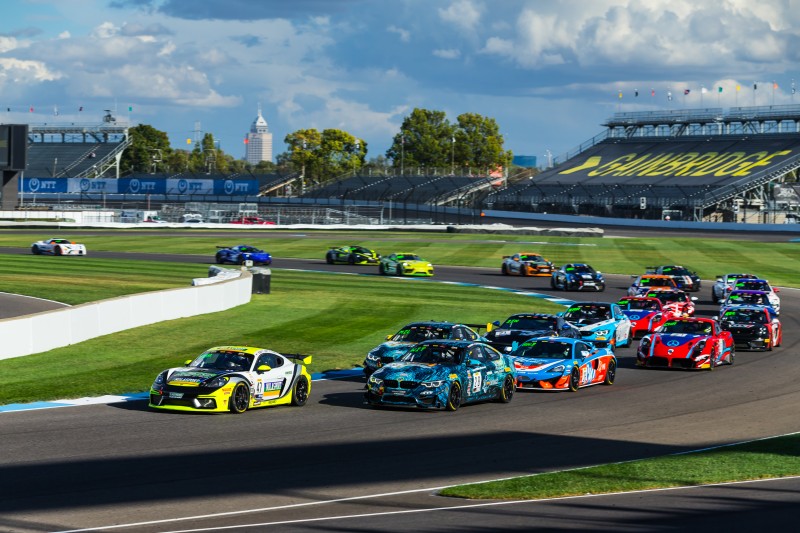 We used sticker tires for both of our qualifying sessions, while our championship rivals used only one set, so they would have a brand new set for one of their races. As it turned out, they used their new set for Race 1. Jarett wanted to get a good jump on the start and try to keep them behind us. At the drop of the green flag, he did just that. Jarett cleared both of the BMWs ahead of him and was looking to challenge the Porsche for the overall lead. After they went side by side into turn 7, Jarett had side-to-side contact with the Porsche in turn 10. Jarett got off better than the Porsche, who fell back, but he was then hit by the BMW, falling back to third. As a result of the contact, Jarett was deemed responsible and given a drive-through penalty. It was a bit of a questionable call, but fighting it wouldn’t change the result. We would have to work our way back up from there.

Luckily, a caution came out just after we served the penalty. This gave us the chance to recuperate, and fight back through the field. On the restart, the BMW took the lead and started to pull away from the rest of the pack. Meanwhile, in 20th place, Jarett was starting to work his way up. He kept making passes, handing it over to me in 9th place overall. We were still 5th place in class, so the goal was to make up as many positions as possible so we didn’t lose too many points. I kept lunging ahead, keeping up with the charging Astons for a while. Our long-run pace was pretty good, so for a while, I was reeling in our championship rivals. My door mirrors were both folded in as a result of Jarett’s contact earlier, so I barely had any visibility of the cars around me! I kept making up some positions, putting our car into 5th place overall at the end, 3rd in class. It was a bit hectic on a restart after a caution, but it was a fun and challenging drive back up through the field. I really enjoyed going toe to toe (and coming out on top) with top-notch drivers like Bill Auberlen, the winningest driver in IMSA history! I finished right behind our rival BMW in class, so we only lost three points - ending with exactly one point behind them. The way I thought of it, the BMW had put their bets on finishing ahead of us in this one race, especially with their tire strategy. With everything that went wrong for us here, we had only fallen back by one point. All we had to do on Friday was beat them, and we would win the title.

Before our final race, our whole crew signed the hood of the car in honor of its last race with the team. These guys were the real heroes of this team, especially with all of the work they have put in throughout the year! Our race on Friday took place at 8:00 AM, and temperatures were near freezing. I don’t think I’ve ever worked so hard to put heat in the tires on the pace laps! I was hoping for another good start like Jarett had the day before, and leading up to the green, it seemed like that was a possibility. Unfortunately, when I went to throttle at the drop of the green, the car switched into auto-shift mode for some reason and immediately went up a gear. This killed all of my speed as I frantically switched back into manual. Luckily, I only lost one position by turn one and was right behind the next cars in line. I managed to get some decent laps in - our car didn’t have the pace to compete up front with the current BOP, but I was still able to build a gap to the rival BMW behind. We pitted as soon as possible, like usual, to cover the chance of a full course caution working against us. 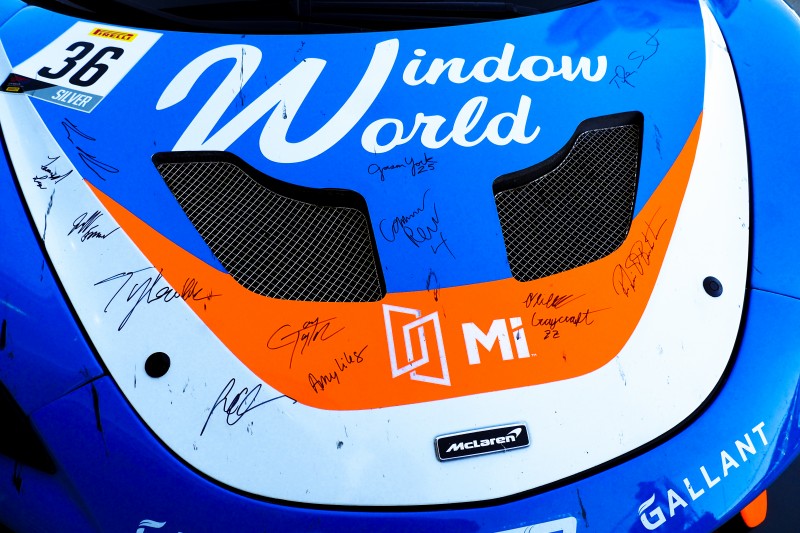 We can use a one-second “joker” with our minimum pit stop time once per weekend. We decided to use that here. Jarett timed his exit to perfection, with a pit time of 95.058 seconds - the minimum with our joker being 95! Comparatively, the #28 BMW had a stop time of over 98 seconds. We picked up almost 3.5 seconds on them. Unfortunately, we weren’t clear yet, Jarett’s door hadn’t shut properly after the driver change, and soon under a heavy braking zone, the door swung open. Jarett drove for three laps with the door halfway in the air, trying to hold on to it, before finally managing to flick the lever properly and close it completely. We were holding our breath the entire time, especially when the officials came over to ask us about it, we just replied, “We know it’s up, he’ll get it don’t worry!” - even though we were terrified at the prospect of having to pit to get it shut. For the rest of the race, Jarett hit his marks and brought the car to where it needed to be. We finished ahead of the #28 BMW by 2 seconds in the end - scoring a class win and 3rd place overall. 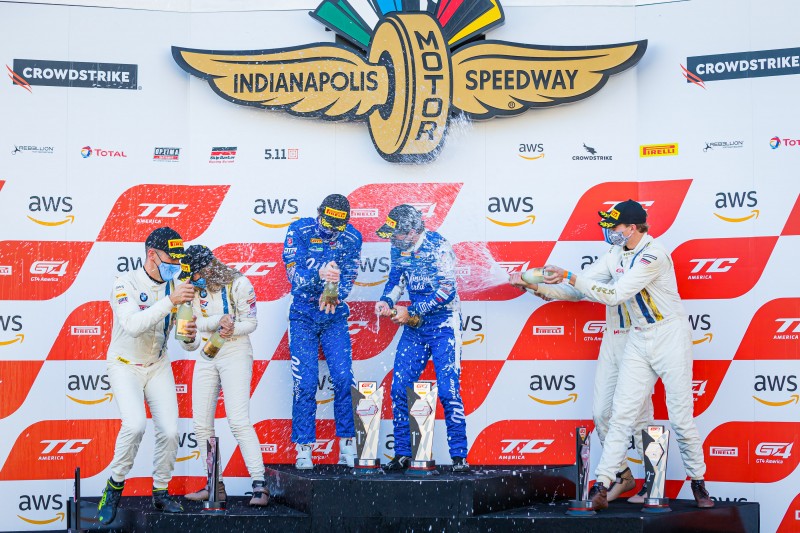 Winning the championship in the final race, at IMS, and with such a special livery was an incredible moment. This team has been through so much this year, so to end the year on a high note was amazing. I really want to thank the whole Andretti team for embracing me as a teammate for the past year and a half. It’s been an honor to work with what started as a small operation, to grow with the team as they evolved throughout the season. McLaren has been great all year as well, I wish we had the chance to work more closely with all of our friends overseas on the engineering side, but that was one of the sacrifices due to COVID that had to be made. 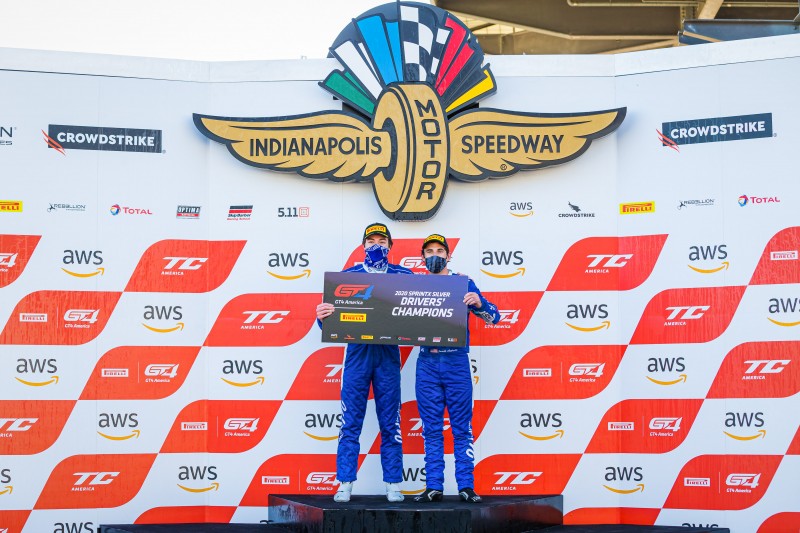 Next year, Jarett is racing an LMP3 in the IMSA Prototype Challenge, which requires a bronze-rated driver to be paired with him. As a silver driver, this cuts away the opportunity to continue driving with him next season. We’ve learned a lot from each other as a driver pairing, so I wish him the best of luck and hope there may be some opportunities for us to race together again in the future. Now it’s time for me to get back to schoolwork - and find a way to get back behind the wheel next year!