Since first racing at Watkins Glen in 2018 it has been a favorite track to return to each year. In 2020, I was sad to see the race weekend here removed from the calendar due to New York’s COVID restrictions, but I was certainly excited for the chance to return this year.

The forecast before our race weekend had shown a chance of rain and thunderstorms in the area, which at Watkins, could mean anything. We had tested at the track a few weeks ago in near-perfect dry weather conditions. A bit of rain could throw a wrench in our plans, as neither Antoine, nor myself, have driven the LMP3 in the wet before. 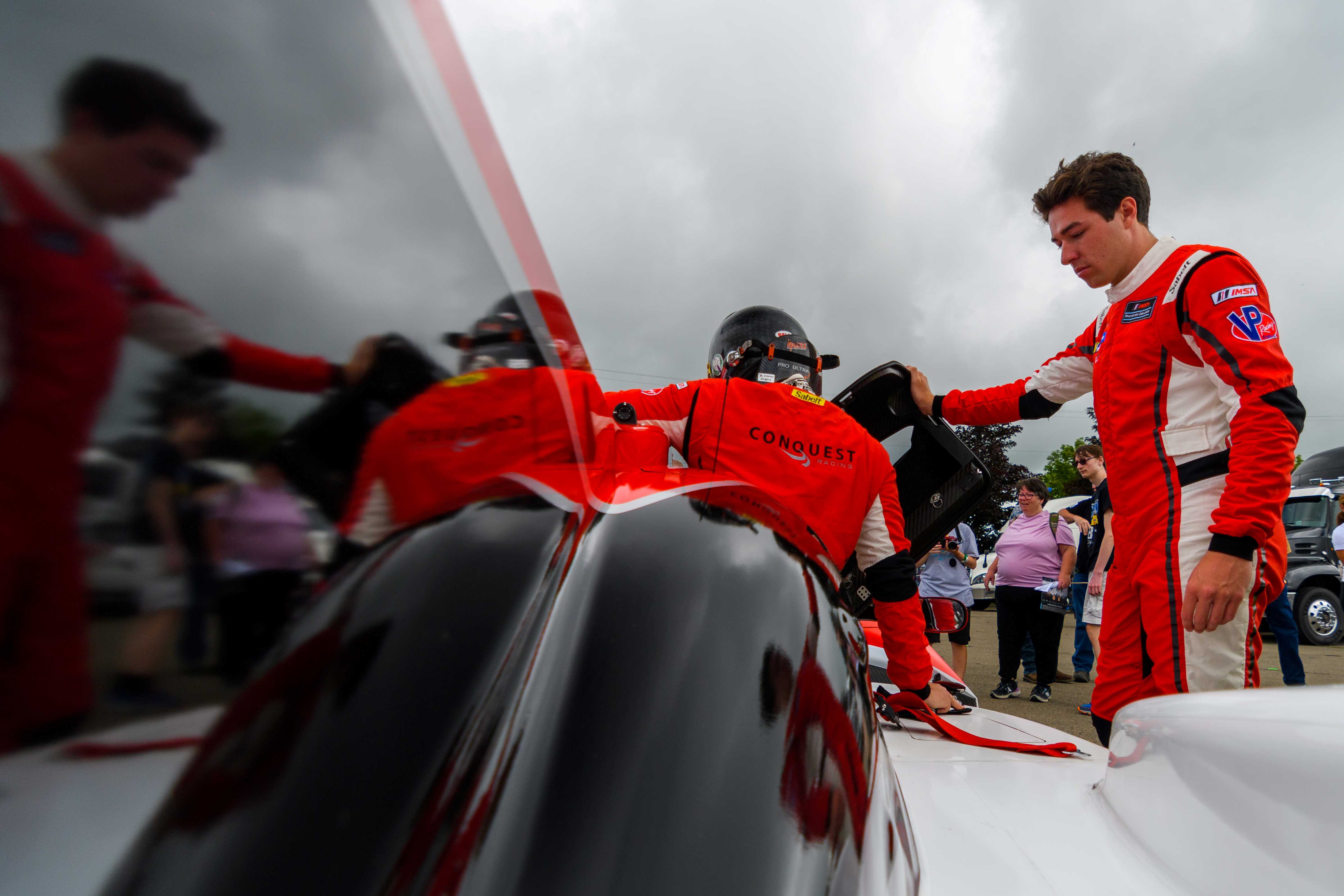 Come time for our first practice session, the track was in a strange in-between wet and dry state, where there was enough water to force us to run rain tires, but not enough to produce any areas with proper standing water. After pitting for an install check and giving the car a final look-over - having been prepped at the shop, I went out to complete about four laps before a torrential downpour descended. With a competitor’s car in the wall, a red flag was brought out for the session. When the track reopened, we sat on pit lane and watched only four cars venture out on track, only to come back in immediately as the conditions were far too treacherous to run in. As it turned out, we were much better in the mixed running conditions than we had originally anticipated. I finished the practice session with a time good enough for second place on the charts.

Unfortunately, the short first session meant that my co-driver, Antoine, had not turned a lap in the car since the test a few weeks ago. He would start the second practice to make sure he had time out there in some form. The track now had proper standing water, but we were still able to get some track time out there. Antoine struggled to get to grips with how the car handled in the wet, but I was able to jump in for a single timed lap at the end to get a reference for data. My single lap out there brought the car into fourth place on the time charts for the session.

After looking at data, Antoine was reinvigorated for qualifying later that day. Fortunately, the track had fully dried at that point – meaning we were back to some dry weather running. Antoine took to the track on slicks for the first time during the race week and put the car in 5th to start the race for the following day.

The next morning, we ran through some driver change and pit stop practices, as these areas had been a struggle for us in the past. With that completed, we got to strategizing for the race. Any threat of rain was diminishing by the minute, so we went for a full dry setup on the car. With that, we were ready to hit the track.

Antoine got off to a great start, jumping from 5th to 2nd in the first corner. His progress was halted by a caution that came out a few laps later, and he fell to 3rd on the restart. He was able to run by himself for much of his stint, pulling away from 4th place behind, but losing a bit to the cars in front. Unfortunately, a strange spin nearing the end of his stint left him beached in the gravel trap, needing a tow out. We went a lap down here, which had put an end to our podium hopes.

We tried some clever pit strategy but did not get the luck we needed with the rest of the field. Antoine pitted for a full-service stop fuel, tires, and a driver change. Our practice in the pits had paid off, as we had one of the fastest pit stops in the field.

On the restart, I managed to pick up a position, and began to reel in the competition ahead. As I was catching the car in front, a bit of rain began to fall on the backside of the track. Although I could see the rain on my windshield, the track still looked and felt dry. The rain near turns 5 and 7 became a bit harder, forcing me to turn on my windshield wipers. The following lap, the car in front and myself had a huge slide in turn 7. It was tough to see, but I figured there was some fluid, whether that was water, oil, etc., on the surface that caused us to have such a massive moment there. It was no surprise to hear the call for a full course caution and see a total of three cars wrecked on the next lap – one in turn 5 and two in turn 7.

Even though the rain had stopped, it was still incredibly slick through those corners on the restart. On top of that, my windshield wipers would not turn off. With it constantly running in the dry, I had big rubber streaks from the wiper blade in the middle of my vision. I could hardly see out of the windshield, which became more of a problem in the run up to the bus stop, where I could not tell where the start of the curbs began. I was extra cautious on the restart, as we were the first car a lap down on track, with no real threat from behind. I lost a bit of ground to the cars in front dealing with the slick conditions, but the last thing we needed at that point was our car smashed into the wall.

I eventually made it past another car in front and got some clear track at the end of the race. I laid down my fastest lap on the final lap, which was about 0.5 seconds quicker than what the other Duqueines on track were running at the time. 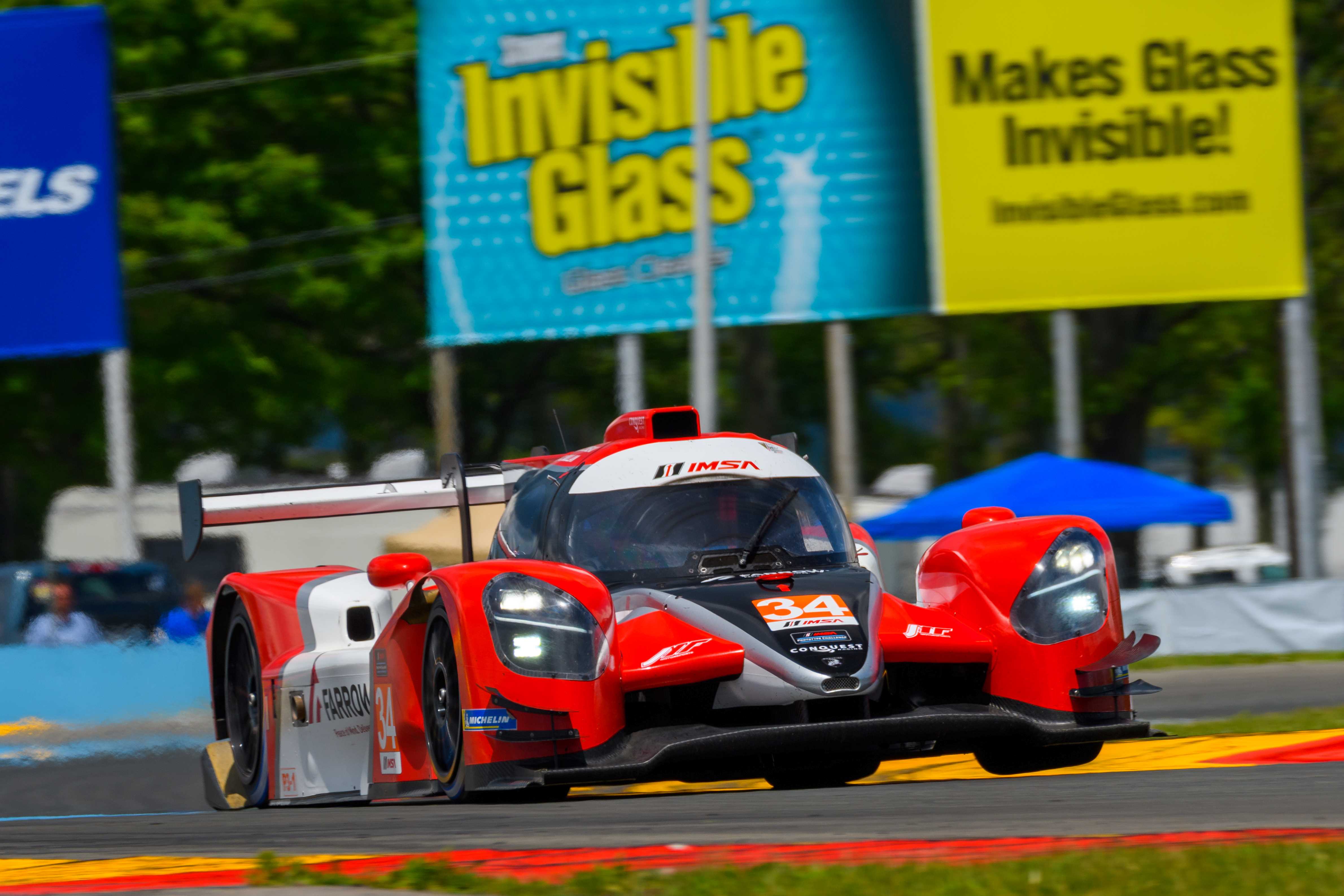 Although the end result in 8th place was nothing to write home about, I can see continued progress being made within myself and this organization each time we take to the track. I am proud to be a part of the Conquest Racing / JMF Motorsports team, and I am immensely grateful for the chance to be behind the wheel of a race car yet again. We have a few months from now to VIR in October, which will give us a chance to reset and refocus when the time comes. Onward and upwards!