Back to the Lone Star State - GT4 America: COTA 2

Going into this year, Watkins Glen was one of the tracks where we knew we could contend for some overall wins after the success Jarett had last year in GT4 Sprint there. Unfortunately, due to COVID restrictions in New York, SRO moved us to COTA for this race - making it a return track for us this season. We raced at COTA back in March and right before the season was halted initially.

If there’s one track we know our McLaren struggles at - it’s COTA. Sectors one and two have a balance of mid-high speed corners that we can carry decent speed through. However, sector three was a struggle. The mix of low-speed and long-duration turns suit just about every car better than us. Going into this race weekend, we knew that we would have to execute everything to perfection to just salvage a few points in our championship battle with the ST Racing BMW. 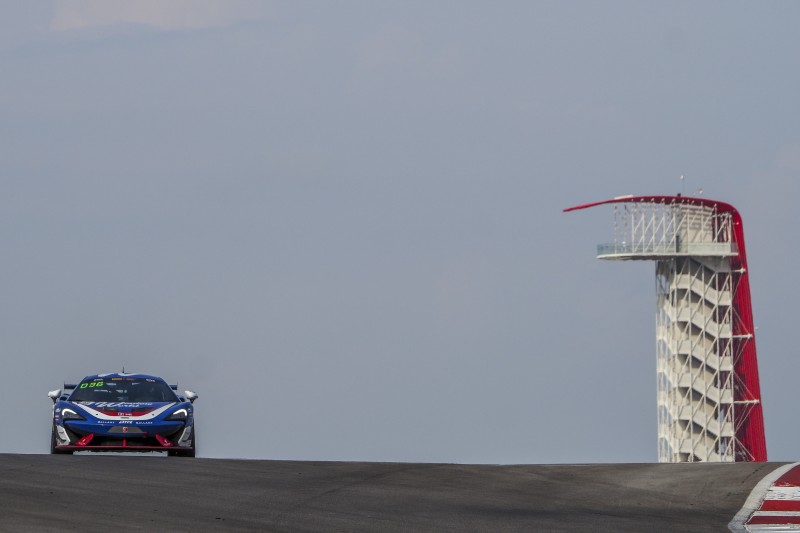 It was a compact race weekend for us, with two practice sessions and qualifying on Thursday. As Jarett wasn’t running his GT4 Sprint McLaren this weekend, we both shared the #36 for the practice sessions. I went out in Practice 1 on a set of new sticker tires, before handing it over to Jarett, making some adjustments along the way. We came into the weekend with a drastically different setup to how we ran earlier in the year, and after making a good set of adjustments, we found a baseline that really helped our tire wear over the long run.

While we were waiting for Practice 2, the skies opened up. It started pouring rain out of nowhere, and with lightning in the area, our practice session was pushed back until the weather cleared up. With our qualifying at the end of the day, we were worried that it might be canceled due to unpredictable weather. If that were to happen, SRO would resort to Practice 2 times to set the grid for the races. We made the decision to run all of Practice 2 as the track dried to get valuable wet weather data, and also to set a time in the event that qualifying would be canceled. Jarett got a feel for the track, before making some adjustments that helped bring his times down in the wet. I got in with about 10 minutes to go, pitting on my out-lap to swap from rain to slick tires. I kept pushing on the dry line and ended the session with a time that would put me third overall. 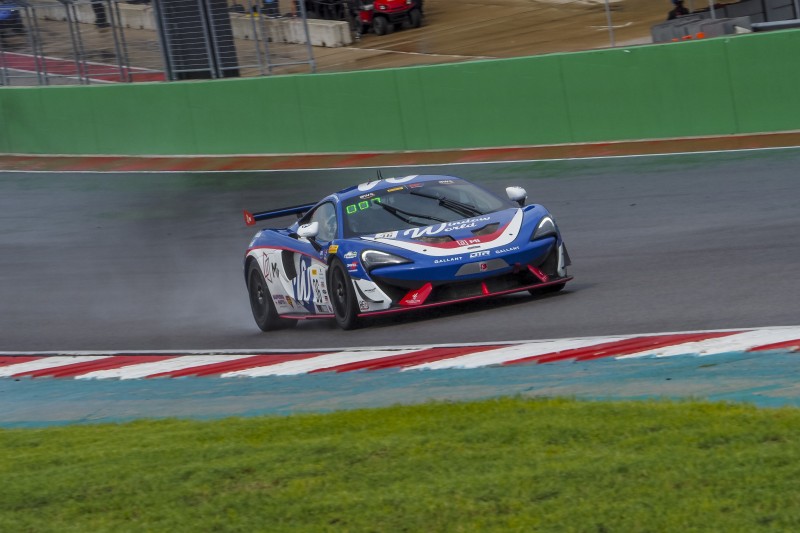 Qualifying wasn’t canceled and was in perfectly dry track conditions as it turned out. We had opted for a new tire strategy this weekend: Jarett would qualify on a set of stickers as usual, while I would opt for his set of tires, instead of qualifying on another sticker set. This would give us a set of brand new tires for one of the races. We also swapped our driver lineups, so I would be finishing Race 1 and starting in Race 2 instead of the usual, starting Race 1, etc. Jarett qualified 6th, and I qualified 12th - our lap times still managed to be within a tenth of each other!

Jarett got a great start in Race 1, putting our #36 Window World McLaren in 3rd position. He had a great fight in between cautions with a Panoz and a BMW, not too far behind our championship rivals. After a short caution, Jarett got underway, but only for a few laps, as another full course yellow came out. If it had stayed green for just one more lap, we would have completed our pit stop - which would have put us at a huge advantage over the rest of the field. This wasn’t the case, though, so we had to wait until the caution had cleared to complete our driver change. Our in-car pit timer wasn’t working, so our engineer had to manually time the stop to make sure we were within the minimum time of 82 seconds. We exited the pits with a total time of 82.6 seconds, not bad considering we were using an old-school stopwatch setup! I made some good gains on the out lap, and as more cars made their pit stops, we were up to 3rd place. Our lack of pace was really starting to show, with the leaders nowhere in sight, I had a charging Panoz with the defending GT4 Sprint champion in my mirrors. I could create a small gap through sectors one and two, but the Panoz would get a huge run on me out of the carousel - turns 15-17. With a few laps to go, he misjudged where I had to brake and tagged my left rear, sending me wide for the next turn. He backed off and I rejoined without losing too much time. I kept enough of a gap to the end to come home third overall, second in the silver class! We were very happy with this result, especially since COTA has historically been one of our weakest tracks. 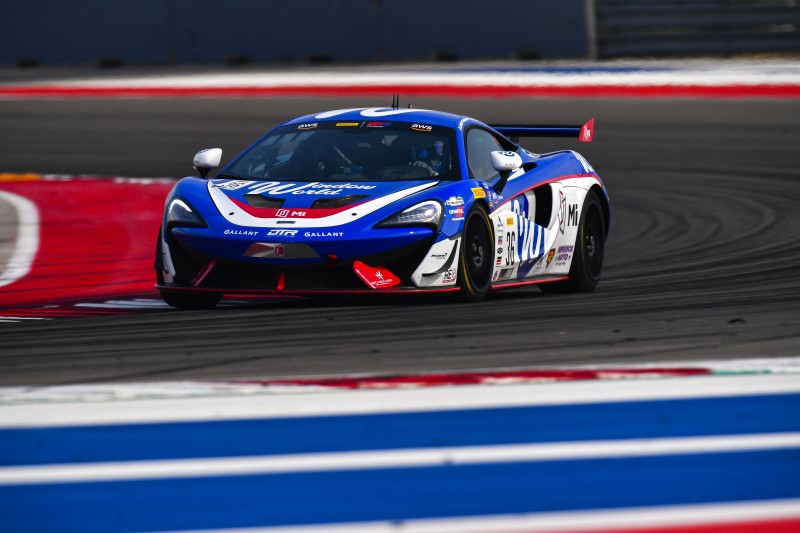 We knew Race 2 would be more of a struggle, starting down the order and on fairly worn tires. I didn’t get a great start but was able to make up some positions on my first lap. I managed to hold 9th place for a while, before falling back to 10th to a charging Aston Martin. We pitted early again, putting Jarett in the car. The built-in pit timer wasn’t working again, but we ended with the same exact time as we had before, 82.6 seconds from manually timing the stop. We dropped the front tire pressures in the stop, which gave Jarett a huge advantage going back out on track. We jumped our championship rivals in the pits, but they had a lot more speed than we did. Jarett drove incredibly defensive for a few laps before the BMW took him around the outside in the carousel. He kept the charge up and finished in 3rd overall again!

We executed everything to perfection this weekend. I’m so proud of the effort this team puts in week in and week out. I don’t think we could have improved at all to our end result, the only way we had a shot at an overall win would be to capitalize on other team’s misfortunes. In the end, we extended our championship lead by one point. Next week, we take to Indianapolis for the final race of the season. To be quite honest, I have no clue how the McLaren will act on one of America’s most famous circuits. It’s a bit of a toss-up, but I just hope we can come out on the right side of it all. We’ll be putting our best effort into the event, hopefully, it will suit our car well! 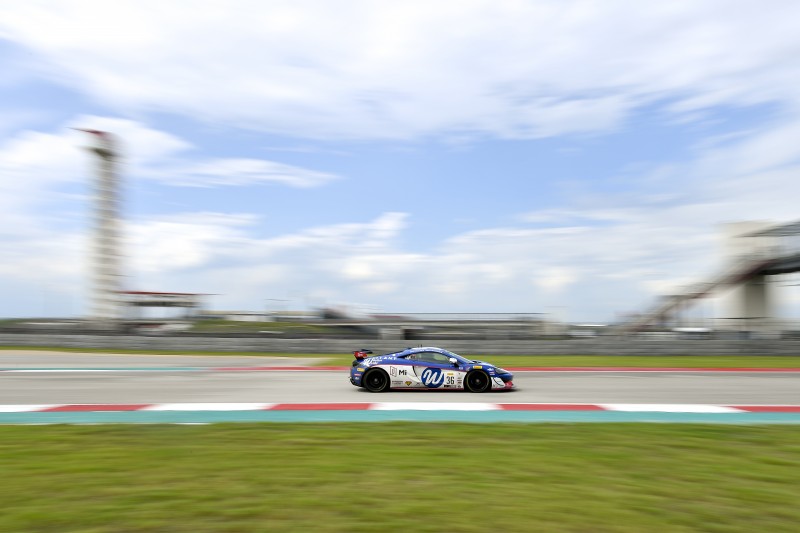