This past weekend at Canadian Tire Motorsports Park (CTMP), we had our fifth race in the L.A. Honda World Racing Civic TCR in the IMSA Michelin Pilot Challenge. It proved to be one of the toughest races I’ve ever driven, but we would end up with our best result of the season so far.

We spent the week in Toronto after racing at Watkins Glen the previous weekend, which was nice since we had a couple of days to relax after our rough finish.

CTMP is an extremely high-speed circuit, even in the Civics, we end up pulling over 2 G-forces in multiple corners. Thursday testing was a good chance for us to build up our confidence in some of the high-commitment areas, along with tuning out some setup differences between the team’s two cars. 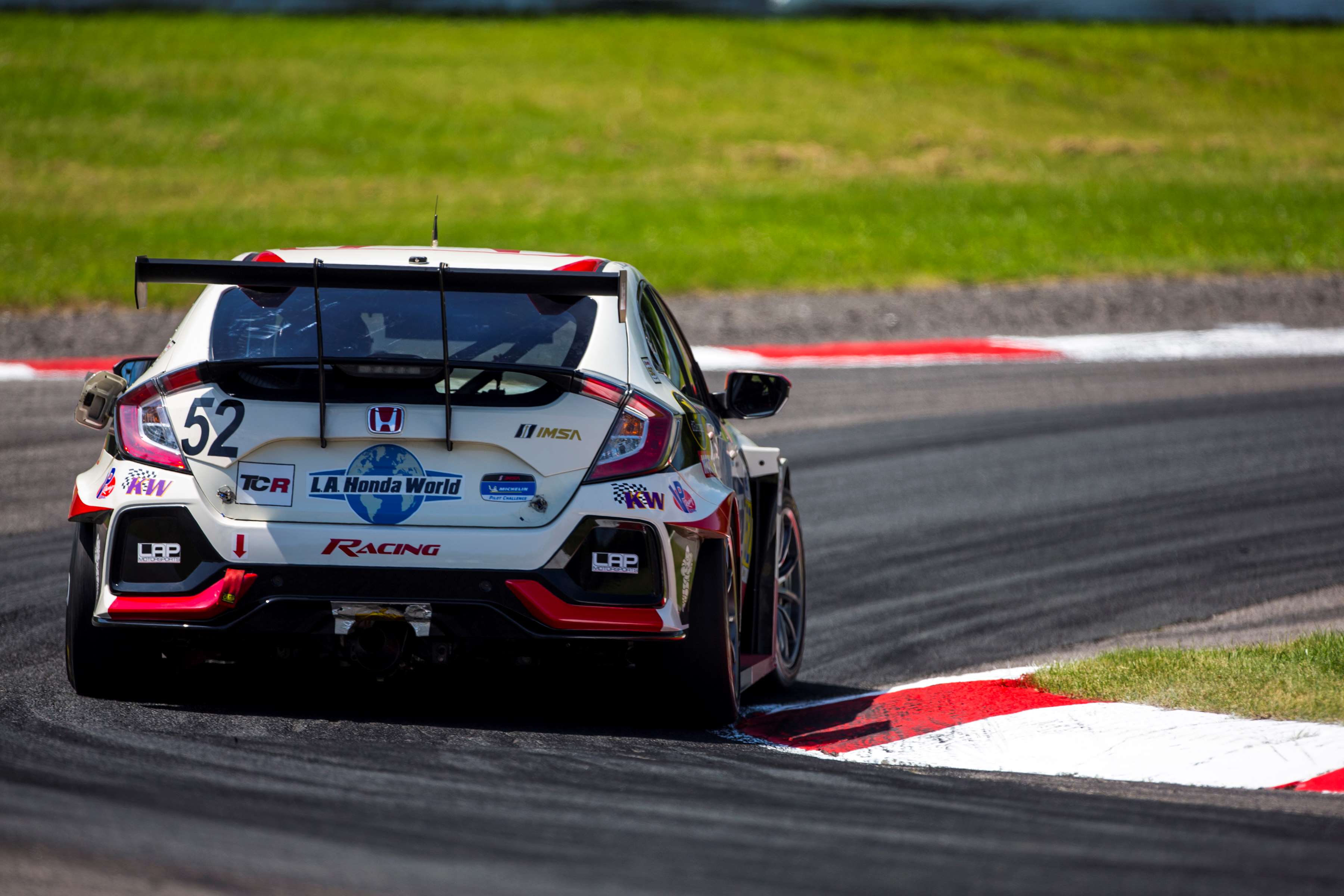 On Friday, we had two of our official practice sessions, the first going well for our car. I ended up being the quickest Honda in the field, 4th in TCR and had the fastest overall first sector out of the entire grid. The TCRs proved to be extremely fast in the first few corners compared to the GS cars, thus shaping up to be an interesting first few laps in the race. A rule change regarding camber 30-minutes before Practice 2 forced us to make a quick change to the car, in doing so, we ended up with an unplanned toe adjustment on the front-end. We suffered from horrendous understeer, but luckily the team found the issue and resolved it shortly after the session.

My co-driver, Max, qualified the car on Saturday morning. He put the car 6th on the grid for the race, saying the car was the best it felt all weekend. The start of the race was eventful for the team, but unfortunately for the wrong reasons. Our teammates in the #37 car had a mechanical issue that put them out of contention on the pace lap. Luckily, they still lead the driver’s championship because of their strong results early on in the season. Max drove a solid opening stint, bringing the car in at the 40-minute mark under caution for fuel, tires, and our driver-change. I got in the car on fresh tires and was off.

I pushed early on, since we knew it was my best chance to make up ground. I got a few positions, but ultimately got shuffled back a little with traffic as the tires started to lose their initial edge. I settled into a comfortable gap and set a fairly consistent pace. As the race went on, we realized we would have to make another stop for fuel and possibly tires. With about 20 minutes left, I felt the tires start to deteriorate. We had run them longer than any other TCR in the field and one felt like it was losing pressure, so we decided to pit. I came in too hot with the tires going down, expecting the car to stick on pit entry, and it didn’t. I clipped the tire barrier, luckily only causing some cosmetic damage. I was sent back out with new front tires and fuel to last to the end.

A full-course caution came to my aid quickly, bunching up the field. After our stop, I managed to stay out ahead of the TCR class leader on track, so I would get the pass-around, essentially getting the lap I lost in the pits back. I hustled to catch the back of the TCR pack and actually gained a few positions during the pass-around procedure. We can go as soon as the command is given, and if cars don’t go, we have the right to go by. It seemed like a lot of cars were asleep for the pass-around, but I had faith in my crew on the timing stand so I went for it. On the restart, I was in 5th, still a little behind the pack since I didn’t have enough time to catch the back of the field. I got stuck behind a car a lap down, but we were still able to close in as the lead pack of TCRs began to battle. They made mistakes, and I was there to capitalize. I slipped through the chaos, moving up one position at a time. I finished in second, barely holding off third at the end.

It was great to finally get a podium in TCR after the unlucky start to our season. I’m more happy for the L.A. Honda World team than myself, the entire group working on our car have come so close so many times, so it feels fantastic to get them the result that they deserve. I also want to give Michelin and IMSA a huge thanks for handling the tire situation appropriately from the weekend before. Mandating tire pressures and camber slowed down the field, but it was equal and stopped these drastic failures from happening. The fact that we could confidently run over an hour on the same set of front tires after Watkins is a testament to the trust in our relationship with Michelin this year.

I’m ecstatic to have some luck go our way for the first time this season, and hope the next time we’re on the podium that it’s the top step! I have a busy couple weeks ahead; this coming weekend I’ll be back in the McLaren 570s GT4 with Jarett Andretti for the next round of the SRO GT4 America SprintX series in Portland before jumping back into the Honda TCR at Lime Rock Park the week after. I’m hoping to keep this momentum rolling for the rest of the season! 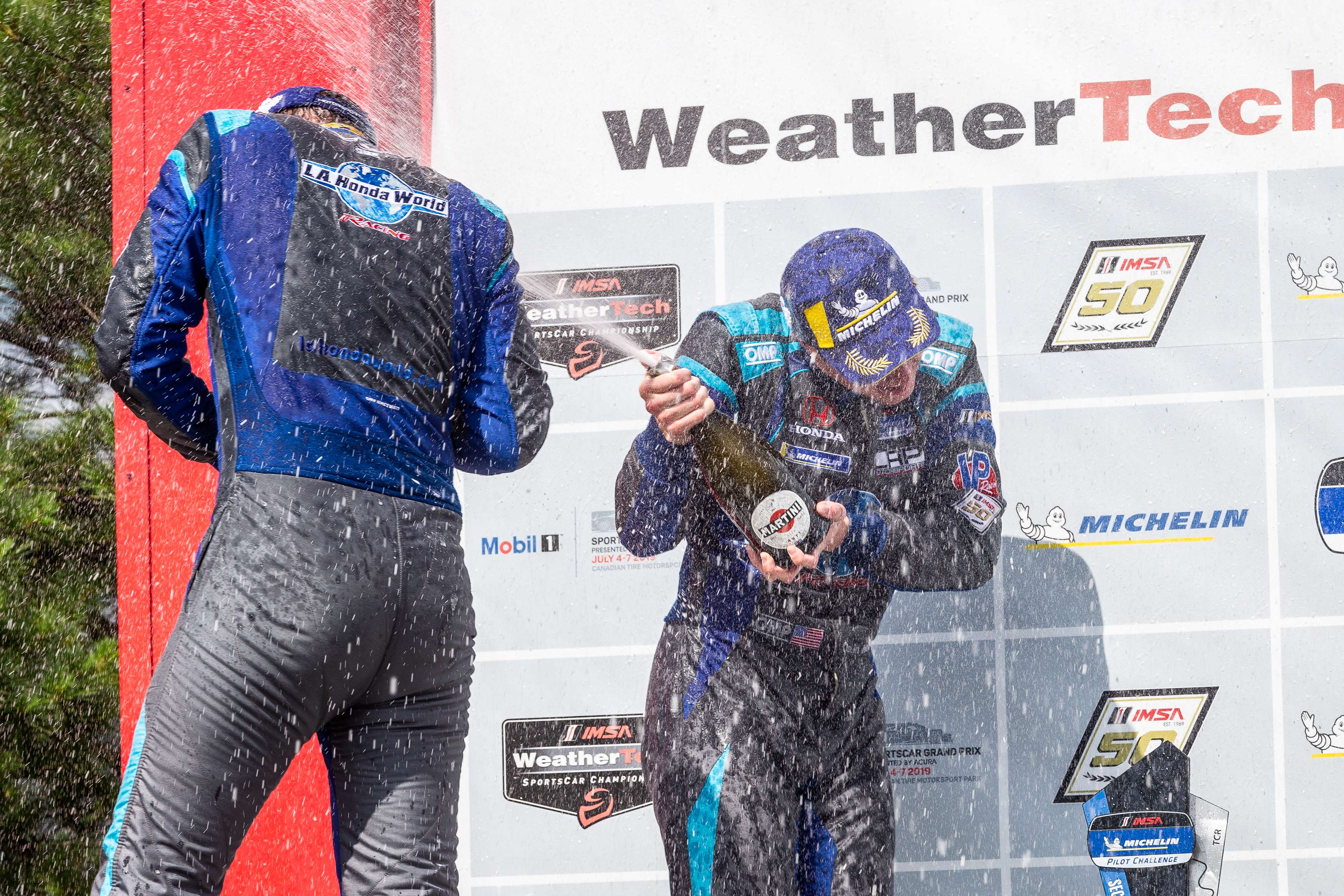